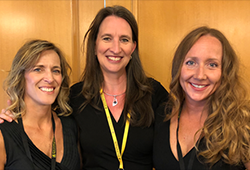 By any measure, Laura Farrelly, Pamela Klyn, and Paula Wittbrodt lead fulfilling lives, and each attributes a big chunk of her success to Michigan Tech. But they also give credit to the big brown house at the corner of College Avenue and Agate Street.

"In the middle of my freshman year, I was feeling so cold and lonely I'd decided to transfer downstate," says Laura. "Then I began meeting girls from the sorority, and I started falling in love with Tech."

The three young women—all majoring in an engineering field, all Class of 1993—joined Delta Phi Epsilon at the same time for the same reason. "The sorority allows you to make deep friendships with other girls, especially at Tech, where there were so few of us," says Paula. Pam agrees: "Sororities offer a unique opportunity at a place where women are in a minority. Even now, my closest friends are from the sorority."

Those friendships have survived and thrived for more than 25 years, and now they have launched an endowed scholarship. Paula, Pam, and Laura began the fundraising effort, and with their fellow sorority members, have raised over $25,000 for the Delta Phi Epsilon Scholarship.

Their motives are many. Laura hopes the scholarship will give upcoming sorority sisters a boost she never received. "I was the first in my family to go away to college, and I never had any scholarships, in part because I had no idea how to get any," she says. She worked her way through school as a math tutor and as a tag checker in the Douglass Houghton Hall cafeteria while focusing on her primary goal: preparing for a good job. Michigan Tech paved the way, and so did Delta Phi Epsilon.

"I got a lot of leadership experience in the sorority," says Laura. "I led committees, got on the executive board, and that led to my ultimate career." Now she is COO of Couragion, which inspires middle and high school kids to pursue STEM careers.

Even so, the barriers to attending college were once much lower, Pam notes. "Kids face financial challenges now that aren't their fault. The three of us thought that if we could give back, that would be great. And we wanted our peers to do the same thing. We thought that if we brought the idea of the scholarship forward, we could get some momentum going, and we did."

Paula, who first raised the idea of a scholarship, cites gender diversity as another reason for the fundraising effort. "The three of us all wanted to support the University's ambition to attract and retain more female students while also supporting the sorority." Also, she admits, for her it's a natural fit. "Ever since I was a student, I've been raising money. I helped lead the Michigan Tech Student Foundation Telefund, so it's kind of in my DNA."

Paula is now Estée Lauder's vice president for international business development and chief of staff to the group president international. She notes that the timing is right for her and her friends to help. Pam, vice president of the Global Product Organization at Whirlpool, agrees. " The three of us are such close friends, and we've been fortunate in our careers, so we wanted to do something for the sorority and for Michigan Tech."

Perhaps most importantly, the scholarship honors the bonds of friendship. "Back when I first joined, I realized that Delta Phi Epsilon was my tribe, that I had found my people," Laura says. "They have become my lifelong friends, and it's so satisfying to see how we've all grown and are now ready to give back."