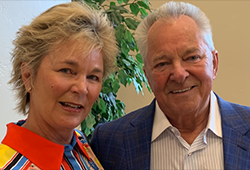 Michigan Tech has been part of Pat Horvath's life almost as long as he can remember. Born and raised in the UP, he set his sights early on attending the University.

"All while I was going to high school in Stephenson, Michigan Tech was in my vision," he says. He wasn't quite so sure about his major, however.

"I knew I was strong in math and the sciences, but I really didn't know what field I wanted to study," says Pat. "Fortunately, Tech had an orientation program that let students talk with faculty members from various departments about their degree programs. At the end of the day, mining and metallurgical engineering interested me the most."

He threw himself into his academics, and his ability was quickly recognized. Industry tapped him for internships starting in his sophomore year; he got his first job after graduation with Wyman-Gordon, where he had worked the previous summer. But when asked about his other activities, Pat admits he didn't have much time for the typical Tech diversions.

The first in his family to go to college, he worked 40 hours a week for four years in the Douglass Houghton Hall cafeteria. "That's pretty much how I got through college," he says. "I was happy to have that job, but it didn't leave room for much of a social life." At DHH, Pat would be promoted to student manager and was responsible for hiring other student employees. "That job also gave me managerial skills." Those skills would prove useful a few years later, after he founded his first company, Accurate Metallurgical Services Inc., followed by H&H Heat Treating Inc.

Now retired, Pat has sold his companies and has settled in Colorado to be near his two daughters. Looking back on a successful life and career, he hands much of the credit to Michigan Tech, so giving back has been an easy choice. A recipient of the Board of Control Silver Medal, he served 10 years on the Michigan Tech Fund Board of Trustees. Now, along with his wife, Debbie, he is supporting the University through two major endeavors.

The first, an endowed scholarship, helps students from his home town of Stephenson attend Tech. "It's so much more expensive to attend college now, and I wanted to help them with some of their expenses," Pat says. Secondly, he is funding an endowed professorship in the Department of Materials Science and Engineering—"I know how important it is to attract and retain good professors."

"I've always supported Tech and will continue to do so," says Pat. "I believe in Michigan Tech."