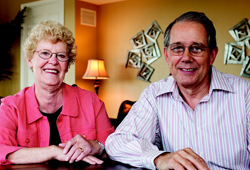 John and Cathi Drake have endowed a professorship in their name within the Department of Mechanical Engineering–Engineering Mechanics. They provide for a $1 million endowment through their will; in the meantime, they support the position with annual gifts to fund research by the Drake Professor.

John earned a bachelor's degree in mechanical engineering in 1964 and a master's in business administration in 1969. "Nobody was better prepared to understand and solve problems than Tech grads were," he says. "We competed with engineers from around the world and beat them to a standstill."

The couple founded Drake Manufacturing Services in Warren, Ohio, in 1972. The firm specializes in computer-controlled industrial equipment. "I had the self-confidence that was needed to survive the ups and downs of a technology-based start-up," he says. Cathi managed the front office and helped maintain communications with employees. "She was a big help in hard times because she was seeing the problems first-hand," he recalls.

Their management team bought the business from John and Cathi in 2007, and the ME-EM endowment was established later that year. "It was time to give back," Drake says. "We gave our two daughters strong values and the wings to fly on their own," he says. "Fortunately for us, they are both enjoying successful careers, leaving some room in our estate plan to think of others."

The Drakes' stewardship for Michigan Tech is based on trust as well as loyalty. "As a donor, you need to believe it's all worthwhile," he says. "We are comfortable with Tech's mission and vision. That makes it easy for us to support the school, and since Tech played such a big role in our success, it is a no-brainer to help the new generation."