Reddy - An IRA Bequest to Save Taxes 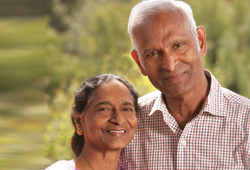 Damoder "Pati" Reddy understands better than most the value of education. It was education, made possible by his family's sacrifices and his own hard work, that took him from a poor village in India to a successful career in California. He also credits his wife, Soumitri, for supporting him.

After earning a bachelor's degree in India, Pati came to Michigan Tech. "My father wasn't rich; he had to scrape and borrow for me to come here," he says. Patti received an MS in Civil Engineering in 1962 and then a PhD from Northwestern University. He returned to Tech to teach until 1969, when he moved to the Los Angeles area to work for Agbabian Associates, a firm that designed structures to withstand earthquakes and nuclear blasts.

Pati scaled back to part-time work in 1986 to manage their investments and in 1990 retired completely. He has structured some of their retirement assets, including an IRA, to benefit Michigan Tech. He says, "An IRA is a smart way to help Tech since it's such a highly taxed asset if given to heirs."

He has also made Tech the sole beneficiary of a whole life insurance policy. And he has two other policies designated primarily for their heirs. Should there be a claim, however, a portion would support two endowed funds established in his and Soumitri's name: a fellowship and a scholarship benefiting students in the Department of Civil and Environmental Engineering.

In addition, the Reddy family makes annual gifts to provide current scholarships and fellowships and to build their endowments.

"I am very fortunate to have gone to Michigan Tech; it gave me a leg up," says Reddy. "All I have accomplished is due in part to Michigan Tech, so I feel that I have to give back as much as possible."