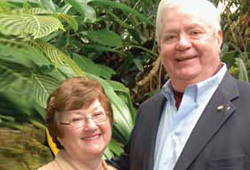 Years ago, John Calder set an optimistic goal for himself. "I wanted to give Tech $1 million," he says. "When I decided to do that, it seemed like an insurmountable mountain." Now he is scaling the peak.

John earned a BS in Mechanical Engineering in 1967 and an MS in Business Administration in 1976, both from Tech. Now CEO of Cincinnati Controls, he has a talent for buying struggling businesses and turning them around. So, when the time came to sell one, he was faced with paying capital gains on $300,000. "I wanted to ensure that my wife, Joan, would be taken care of if something happened to me," he says. "At the same time, I wanted to help Michigan Tech."

The solution was a charitable remainder unitrust, or CRUT, which allows the Calders to avoid capital gains taxes. "It will give Joan funding to live on, and when we are both gone, the principal goes to Michigan Tech," says John. They also give through a universal life insurance policy and are longtime annual supporters.

Along with supporting other University programs, they have established the Calder Systems and Controls Laboratory in the Department of Mechanical Engineering - Engineering Mechanics, which provides hands-on training in electrical controls. John credits that kind of practical preparation for launching his career and enabling their generosity. "When I graduated from Tech," he says, "I could walk out onto the factory floor with a screwdriver and an oscilloscope and make things work."

Now, they are looking at expanding their philanthropy by endowing an assistant or associate professorship for $500,000. "We'd like to support new faculty members who are just starting out," he says. With this new gift, the Calders will be underwriting research and undergraduate education at Tech, two missions John sees as intertwined. "I view research as an addition to undergraduate education," he says. "We need both."

*Please note: Since your unitrust benefits may be different, you may want to click here to view a color example of your benefits.